In favor of Government in CPN Maoists’ Leadership 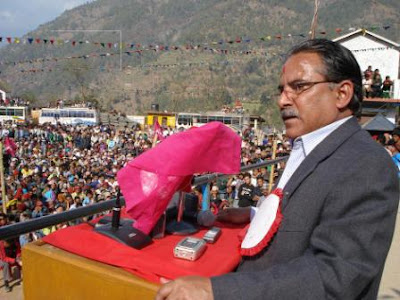 This peace of writing was aroused in me while I was very much worried about the future of peace process and the future of the nation itself.
The politics has changed its direction since the election of president and vice president. I said it has been changed because the politics took the path of majority and minority breaking the culture of consensus. The purpose of going to the simple majority in spite of two third majorities was to break the politics of consensus. Though Maoist was resisting this provision at first, it could not remain firm in its stand. So the provision of simple majority to elect the top positions of the nation and to form the government was included in the 5th amendment of interim constitution. After that amendment, the Nepali politics headed towards the same way of so called democratic period of 1990 to 2006.
Again the politics of betrayal and disloyalty had started. The three party’s alliance of NC, CPN (UML) and MJAF was formed in the last hour of the election of the president. The coalition became success to elect the president and his vice of their candidates. I have already mentioned my disappointment with the person in the post of vice president. So the first mistake of this coalition was to elect the controversial person in such a position.
Now the coalition is making mistakes by claiming the right to form the government in the name of mathematical majority. Even they are acting as they have forgotten the result of the CA election! The verdict of the people in the election is very clear which is, form the government in the leadership of Maoists with common agreements among all the parties. I think this was the mandate of the Election. But some of the leaders of the three parties’ alliance are claiming for their leadership in the government.
This is the matter of great concern. If such a government formed excluding Maoists, it would be the great mistake in the History and the misfortune for the country. I think it is not easy to run the country excluding Maoists because they will not remain silent. They will be forced to take the offensive actions against such government. That may be in any form. Ultimately, that will invite a different type of conflict which will be very harmful for the peace process and constitution making process. The country will again be the hostage of uncertainty.
At last, if we are questing the real democracy and we want peace, lets raise the voices in favor of Maoists government!!!!!
Posted by Ramesh Adhikari at 11:22 PM