Sometimes in My Dreams 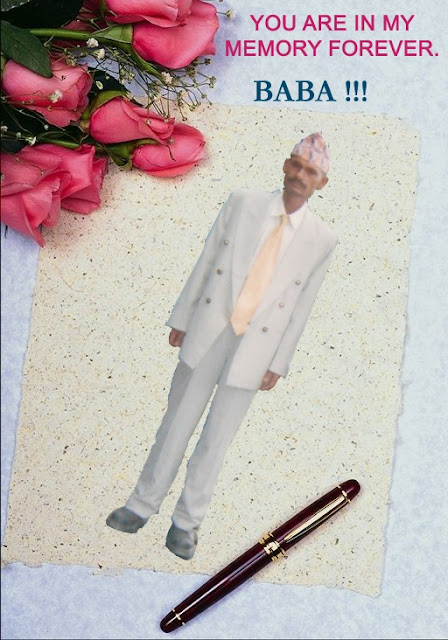 He appears at my door when I rush to answer the sudden knock. A man in  Topi, snatches my heart with his gentle smile. He is as lucky as me since we do not get beard. At least we both could save from shaving. My hair freezes to encounter him after ages. My throat does not allow me to utter any word. Mouth just remains open. I can't believe what I am witnessing! Simple shirt with pocket at left chest, simple trousers without belt, a diary in right hand and a pen in shirt pocket! I find him in the exact attire in which I saw him last time. He left home in the year 2003 to attend a "Poet's Conference" in the same attire.

He used to carry a small diary with half damaged cover and a star line ball pen. I used to be curious about the things written in his diary. Once, I dared to open it. I was amazed. The diary was full of beautiful poems with incredible handwriting. While reading, I could not help myself comparing him with Lekhnath Poudel and Madhav Prasad Ghimire. I found the poems not less beautiful and heavy in conveying message than those of these poets. All the poems were in rhyme (We say 'Chanda' in Nepali). I still remember 2 stanzas of a poem. It seemed he wrote those lines in memory of Laxmi Prasad Devkota (the Great Poet of Nepal).
The poem reads:
मुना झै छन सारा नवयूवतिका हालतहरु ।
बिदेसिएका छन् सब मदनका तागतहरु ।।
धनैको लाल्चाले गरम भूमिमा ब्याकुल बनी ।।।
जलेका छन् हाम्रा नव मदन काकाकुल बनी ।।।।

The lines are talking with Poet Devkota. They are comparing today's youth with the characters of his overwhelmingly famous book "Muna Madan". Madan goes to Lhasha to earn breads neglecting heart rendering request of Muna- his wife not to go, in Muna Madan. Muna says she would be satisfied in very low standers life rather being separated. The extract of poem above says young man are still in ques to go to overseas to earn. The location has changed from Lhasha to Arabs and Gulf. We hardly find modern Muna, who is satisfied even with what they have.

The extract says: "Black Law started to roll on the chest of poor; Imperialism has started to contaminate the grace of Earth". The date when the poem was written was 2004. The time when the 'People's War' was in its climax and the then King was exercising the absolute monarchy banning all the political parties.

The architect of such beautiful poems is at my door! How should I react? I am in dilemma.
I know very well that he had multiple personalities: an overseer (Junior Engineer), communist party member, social worker, community leader and poet. What I liked the most was a poet in him. The poet is standing at my door! He seems he left all his personalities behind and came just to meet me. He asks a permission to come inside after a long silence from my side. I happily allow him. How can I deny?

He creases my hair and asks about my days- "have you completed your study?
"I am writing my thesis"- I replied.
"On what topic?"- He asks with happy eyes.
In a murmuring voice I said- "Mulk Raj Anand's 'Two Leaves and a Bud'"
He started his lecture on the particular book. I cannot believe he has already read that book which I could not find in Nepali and Indian market. A friend in the UK had sent me that book.

I am enjoying his company immensely. My heart is weightless in the pleasure. I am feeling very much delighted like a crack of the paddy field feels getting rain after a long drought. He goes on advising me the way that I should take ahead. I am listening him as a disciple listens to his Guru. Why would I miss the chance? After all, I was dying for this moment for a long time. I am lost in his voice.

In the meantime, my cell phone rings. I woke up suddenly, wanted to break the cell phone as it broke the series of my dream. I tried to sleep and reconnect with the moment but could not.
I cried loud "Baaaaa! Please come back…"
I have not done yet, please Baba come back"
"What happened?"- My brother jumped to my bed hurriedly with frightened eyes.
"He was here!"
"Who"
"Our baba"
He started to cry.

It is the worst part of being elder that you cannot show tears in front of younger because you are supposed to wipe their tears. I had to squeeze my heart and hold my tears to take care of my brother. I had no choice rather than scolding my stupid heart "Stop being mad! How baba, who passed away 9 years back, can come to the room?"

Still, I want to get him in my dream again and again.