The Western coalition involved in the military offensive in Libya have continued their air strikes despite calls by a section of the international community for an immediate ceasefire and the opening of negotiations between the parties involved in the crisis. With the backing of the United States, France, United Kingdom and Spain, it has now become obvious that the Western powers are pursuing a hidden agenda in their attempt to decimate Libya under the cover of the UN Resolution 1973. Analysts say the coalition forces have deliberately slanted the UN resolution to unleash mass destruction, not only on Libyan arsenals, but also the country’s entire economic infrastructure.

The resolution, for which 10 countries voted in favor, zero against, and five abstentions, authorizes member states “to take all necessary measures… to protect civilians and civilian populated areas under threat of attack in the Libyan Arab Jamhariya, including Benghazi, while excluding an occupation force.” There are indications that although the insurgents, whom France has vowed to enthrone in Libya, may not understand the challenges they will have to face, once they come to power. They will have to preserve the independence of the country and this will work against 'the hidden agenda' and spark a future attack even with the insurgents in power. Promises of financial support to enable them rebuild Libya may be pouring in from the Western powers, analysts say this cannot come without the insurgents paying 'a price for it'. They say that France, in the forefront of attempts to destroy Libya, should draw a lesson from the post-war race for Iraqi oil during which the Washington shoved Paris aside. On Libya, 'France threw caution to the wind', catching the European Union unawares, exploiting the naivety of the Arab League and brushing aside, with disdain, concerns expressed by the African Union with its 'pioneering' action over Tripoli and other Libyan cities. 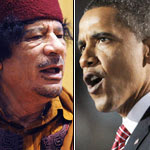 Libyan oil, one of the most refined in the world, is the main motivation behind the action of the Western powers.
Its economic independence has long made even the most powerful Western country jealous. It is therefore not surprising that a very clear text of the UN Resolution (which said 'excluding an occupation force'), could be misinterpreted to suit their purpose. Forecasters say France plans to propose, to its new leaders, the establishment of a “Marshall Plan” to rebuild 'Libya after Gadhafi'. Expectedly, the Western media are backing this venture, using phrases like “Africa once again fails to enter History” or “We know what this AU panel is capable of” in their one-sided write ups on the real situation in Libya. The truth about the real motivation behind the actions in Libya could manifest itself, thanks to the digital era, in the social media of facebook, Twitters and Wikileaks. Declarations of “Gadhafi must step down“, “Kadhafi has lost legitimacy”, by Washington and Paris, do not conform with the basic democratic rules which stipulate that no country has the right to determine what happens in another country.

Posted by Ramesh Adhikari at 2:14 AM