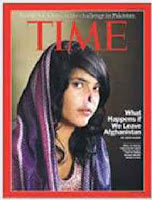 Reprising a legendary 1985 National Geographic cover, this week’s Time magazine cover girl is another beautiful young Afghan woman. But this time there is a gaping hole where her nose used to be before it was cut off under Taliban direction. A stark caption reads: “What Happens If We Leave Afghanistan”. A careful editorial insists that the image is not shown “either in support of the US war effort or in opposition to it”. The stated intention is to counterbalance damaging the WikiLeaks revelations—91,000 documents that, Time believes, cannot provide “emotional truth and insight into the way life is lived in that difficult land”. Feminists have long argued that invoking the condition of women to justify occupation is a cynical ploy, and the Time cover already stands accused of it. Interestingly, the WikiLeaks documents reveal CIA advice to use the plight of Afghan women as “pressure points”, an emotive way to rally flagging public support for the war. Misogynist violence is unacceptable, but we must also be concerned by the continued insistence that the complexities of war, occupation and reality itself can be reduced to bedtime stories. Consultation with child psychologists apparently preceded Time’s decision to run the image, but the magazine decided that in the end it was more important for children (and us) to understand that “bad things do happen to people” and we must feel sorry for them. The WikiLeaks revelations of atrocities and civilian deaths are evidence of some rather terrible things that are done to people but are bizarrely judged not to provide a “window into the reality of what is happening”. Time is not alone in condensing Afghan reality into simplistic morality tales. A deplorable number of recent works habituate us to thinking about Afghanistan as what Liam Fox, Britain’s defence secretary, called a “broken 13th-century country”, defined solely by pathologically violent men and silently brutalised women. While Afghans have been silenced and further disempowered by being reduced to objects of western chastisement, a recent judgment against Asne Seierstad’s The Bookseller of Kabul has raised the possibility of challenging their depictions. Based on her stay in the eponymous protagonist’s home, Seierstad’s memoir uses offensive commercial language to describe ordinary marital negotiations and refers to female characters as “the burka”. The tone implies even the most anti-Taliban Afghan men are irredeemably vicious patriarchs. Predictably, some critical reaction deemed Afghanistan a “horrible society”. While there exists a colonial tradition of relegating the non-west to the past of the west—and some suggest leaving it to rot in hopelessness—the trendier option involves incorporating Afghans into modernity by teaching them to live in a globalised present. In non-fiction bestsellers such as Deborah Rodriguez’s Kabul Beauty School, an American woman teaches Afghan women the intricacies of hair colour, sexiness, and resisting oppression. “To all appearances, there is no sex life in Afghanistan,” writes Rodriguez, obsessed—like Seierstad—with the nuptial habits of Afghans. Sex and the City in the Middle East may have tanked as a movie, but as ideology it has displaced meaningful global feminism. Acceptable Afghan-American voices such as Khaled Hosseini (The Kite Runner) and Awista Ayub (Kabul Girls Soccer Club) reiterate the notion that suburban America can “infuse” Afghans with freedom. Formulaic narratives are populated by tireless Western humanitarians, sex-crazed polygamous paedophiles (most Afghan men) and burka-clad “child-women” who are broken in body and spirit or have just enough doughtiness to be scripted into a triumphal Hollywood narrative. The real effects of the Nato occupation, including the worsening of many women’s lives under the lethally violent combination of old patriarchal feudalism and new corporate militarism are rarely discussed. The mutilated Afghan woman ultimately fills a symbolic void where there should be ideas for real change. The truth is that the US and allied regimes do not have anything substantial to offer Afghanistan beyond feeding the gargantuan war machine they have unleashed. And how could they? In the affluent west itself, modernity is now about dismantling welfare systems, increasing inequality (disproportionately disenfranchising women in the process), and subsidising corporate profits. Other ideas once associated with modernity— social justice, economic fairness, peace, all of which would enfranchise Afghan women— have been relegated to the past in the name of progress. This bankrupt version of modernity has little to offer Afghans other than bikini waxes and Oprah-imitators. A radical people’s modernity is called for—and not only for the embattled denizens of Afghanistan.

PRIYAMVADA GOPAL
The Guardian
Posted by Ramesh Adhikari at 4:30 AM